The victims in Kratie denied the Health Ministry’s statement that rice wine poison killed 2 people and made 48 other sick. They stated that nearly 50 people who experienced unusual symptoms hadn’t drunken rice wine. Some children got such symptoms as well.

The people poisoned confirmed they believe that the quick conclusion made by the Health Ministry was an excuse and that this was not responsible for the victims’ health, adding that the poisoned people hadn’t consumed rice wine before being submitted to hospital.

The villagers who visited the sick people at the Department Health said (under the condition of anonymity), that until that point 48 patients had got better and 27 returned home. They said all of those patients totally denied drinking wine, but they had used the water from O Taki and O Choeng rivers in Svay Chras village, Snoul district, adding that they felt dizzy and exhausted, the same symptoms expressed by the 18 who died in May.

Dr. Ly Sovann on 14 July told local media those people had a symptom of rice-wine poisoning. He continued, stating experts had been doing tests at a national level to find the reason behind the poisoning. Civil societies said the statement made by the Ministry was an excuse, irresponsible, and that the ministry was defending the interests of the Chinese Mining Company.

After the ministries statement, Kratie provincial police and prosecutor temporarily closed a rice wine production facility in Thmey village.  Civil societies claimed that the action of the authority diverted the case from the public attention, and the victims still claimed they got poisoned of the river water from the Chinese company.

The founder of ‘Mother Nature’ Alejandro Gonzalez Davidson, argued that the authority had diverted the case to the rice wine poisoning case, as the investigation had not been done by the experts. He said it was in the nature of the authority to close down the investigation and that because of their actions the people remain victimized.

ADHOC’s spokesman Sing Senkarona stated that his institution hadn’t had any role in the investigation on the case, adding that the case contains a lot of suspicious points and that the statement between the authority and villagers are different.

[Khmer is the official version of this article] 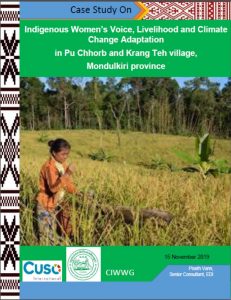